Frozen to the core... 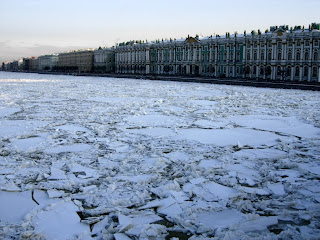 I've lived my life thus far following a general rule that I'd never go on holiday in winter somewhere colder than it was in the UK. Hence I've never been found skiing the Alps or off visiting Father Christmas in Lapland. (Happy instead to wait patiently for him to come to me in the comfort of my own home...) 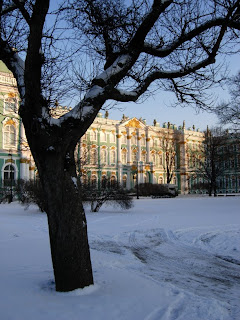 Thus its also something of a 'culture shock' to be faced with the temperatures St Peterburg is now experiencing. This isn't just cold, its bloody freezing. I went out today in obligatory winter wear - thermal base layer, two t-shirts, jumper, fleece, jacket, hat, gloves and thermal 'Buff' scarf - with blue skies above and a layer of snow on the ground. It took me at most about 15 minutes to feel the cold. More than 5 minutes with my gloved hands out their pockets taking photos and I would have welcomed them simply going numb instead of the crippling pain they quickly headed towards. I thought my nose was going to fall off and I couldn't risk standing still for fear of losing blood flow to my lower body.


Ok, so maybe I'm not quite a-climatized yet. Give it a few days and I might be ready to roll around in the powder making snow angels. I doubt it though. The Russians don't seem to 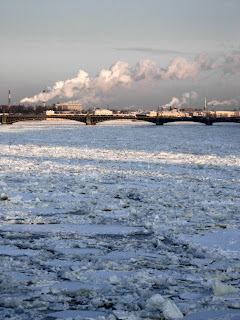 see it as an opportunity for play and instead have proven very adept at shifting large quantities of it off the roads and pathways, even clearing the square in front of the Winter Palace by digger.


The real indicator of how close Hell must be to flicking on the central heating is that Neva has apparently gone from watery highway to frozen tundra in the space of a few days. I was not expecting to see this while I was here. Not sure it was worth losing a few limbs to frostbite in my effort to get a photo though...
Posted by Malcolm Learns Russian at 09:53