Well, as promised, today saw me tucked up in one of the city's many depositories of Soviet history salivating at the wealth of documentary evidence on display. Though only four small rooms made up the branch of the Political History Museum dedicated to the activities of Russia's secret police - from their formation under Nicholas I and through both the many Tsar 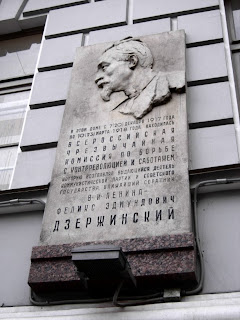 From Lenin and Martov's original rap sheets within the files of the Okhrana, to Party directives on the formation of the Cheka in the throws of civil war and a declaration of Dzerzhinsky on the 'Red Terror' later doctored as incriminating evidence against Trotsky at the end of the 1920's.

This, ladies and gentlemen, is history. Its not pretty, its not glamourous, but my god it sparks my imagination and loses me to its cool, dusty embrace before I can resist.

Like most of the museums already discussed in this blog and found within the city, I discovered the staff of kindly old ladies a welcoming force of knowledge, stirred by my lone presence in their hallowed halls, desperate to recount endless insights into the documents and history on display. One lady in particular, regardless of my lack of Russian, nattered away happily, expecting only the occasional nod on my part while she offered her take on the revolutions of 1905 and 1917. 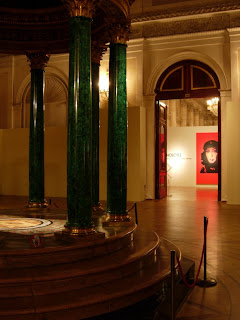 Meanwhile as I entered more contemporary exhibitions on the activities of the KGB in the 1970's and 80's, one of the guides did her best to answer my questions in a combination of broken English and Russian. (On both our parts!) If nothing else I'd love to return to some of these museums with a greater grasp of the language just to appreciate how much knowledge these guardians of knowledge maintain and repay their enthusiasm with more stimulating conversation on my part.

With the time lost here I didn't make it to the main branch of the museum across the Neva. Still I took the opportunity of free student access to pop into the Hermitage to see if I could catch up on a few more of its halls not yet viewed. I unexpectantly continued in history mode having found myself among the collections of Egyptian, Greek and Roman artifacts reminiscant of those on offer in my native Oxford's 'Ashmolean Museum'. (Link provided for anyone finding themselves in my part of the world...)

This developed into a complete contrast when I emerged among a temporary exhibition of new British art that was a heady mix of pop culture and pretentiousness. Nice to scratch the creative itch that I still manage to nurture. If there's one thing I should try and do when I'm in this city its pick up a sketchpad and draw.

The end of the day provided a pleasant surprise as I discovered the city lit up following my absense since the weekend. Nevksy Prospect was a little on the Blackpool promenade side but it was still an impressive spectacle and the hint of snow definately increased the festive factor. I can almost taste the turkey...(Though that could be my body ready for a change of its monotonous pasta based diet!)
Posted by Malcolm Learns Russian at 12:06