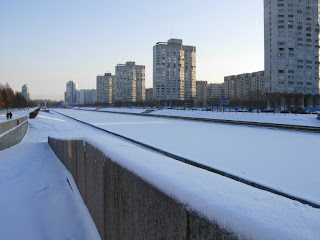 I've been meaning to post up some photos of my make-shift running track that - until the temperature took a massive plummit to negative double figures over the weekend - was my primary means of breaking a sweat while out here.

I managed a few sessions last week but its going to take a serious boost to my self-motivation to get me out while the temperature is as cold as it is now. More on that later... 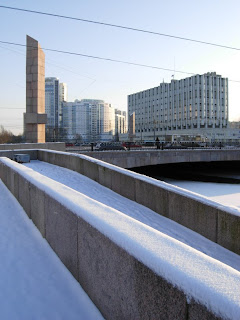 The other option I suppose is to find myself an old wooden dachas in the mountains and scale a few peaks to cries of "Drago!" ala Rocky IV. (Which was actually shown with its obligatory half-arsed dubbing last week. I do love a good montage!)

These images show the straight course of the river which is crossed at either end by a bridge that allows a circuit around the circumference of the whole thing. You can also add in a few step runs for interval training if it takes your fancy. Its not usually under half a foot of snow and you'll find tarmac by the river and a dust track under the trees. Three or Four laps in a session is usually enough depending on what you're aiming for though just watch the wind can be tunnelled a bit to give you a contrast between head and tail wind depending on which way you're travelling.
Posted by Malcolm Learns Russian at 09:36