I'd like to tell you that having seen both ends of the massive Moskovsky Prospekt today my legs managed to carry me across the whole length of it. Unfortunately I called it a day at 'Frunzenskaya' metro station and then backtracked from Nevsky Prospect to see the finish. 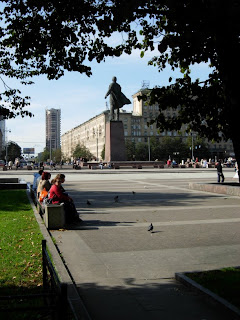 Nevertheless this was still a chance to see the truly monumental scale of Soviet (and Stalinist at that) architecture that dominates this road into the city. The presence of the old hammer and sickle is stamped across the landscape within this concentration of concrete structures. This is Leningrad through and through. Even the green spaces of 'Victory Park' (Park Pobedy) - built to commerate the victory over Nazi Germany - contain an imposing collection of monuments large and small to hero's of the Soviet Republic.

I was helped by blue skies - as a side note I'd love to know why the BBC weather forecast seems able to provide more accurate predictions of weather here than in Oxford? - offering a striking contrast to the grey of the buildings. It gave me chance to flex my creative muscle and spend a while with my old black and white film camera. I spent the morning attempting to create a 'photo-joiner' of the view on offer at the central square where I'd first spotted Lenin greeting newcomers to the city. What I hadn't noticed on my first visit was the prominence of a Nike store across the street from his gaze. Tag lines like 'Revolution: Just do it' or 'Socialism: Never miss a step'...ahem...sprung to mind and I proceeded to fanny about for an hour or so going through a couple of films trying to piece together the image I had in my head. It remains to be seen if it will come out as a success but I'll try to remember to post up the result.
Posted by Malcolm Learns Russian at 11:25