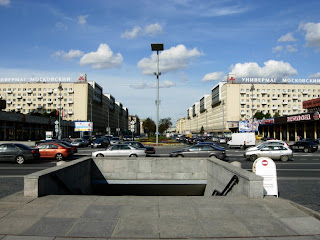 Yesterday I finally got to scratch my Soviet itch again! Travelling across the city by metro to the end 'Московская Проспект' we were met by Nastya for a group excursion. Aiming for what is the southern gateway into the city we were greeted by the sight of the 'Monument to the Heroic Defenders of Leningrad' (To give it its full title).

However before all that, I headed northwards just a few blocks to the site of what was to be the new central square of the city - if the Soviets had had their way and the natives not stu 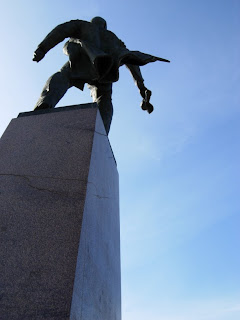 bbornly refused to take any notice - where I finally got to see my first Lenin statue. After being presented with a wooden box when I travelled across to Finland Station back in April it was great to finally see the old man himself. He still cuts quite a dashing figure, doffing his cap to city before him.

The square in which he stands, indeed much of the surrounding area is dominated by Soviet architecture. Though I'm not sure the conversion of one of the most striking Soviet landmarks I've seen thus far into a business complex / bank stays particularly true to its socialist heritage. Ah well, the times they are a changing...

I stuck around long enough to take a few photos and admire the fountains, where yet another wedding party was stood around posing for photographs. (A regular sight this trip around the city, we were even given chance to watch a 'mock' ceremony in the Kazan Cathedral on our last excursion that apparently follows the official joining for those willing to pay for the priveledge!) 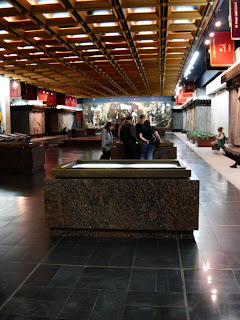 Returning to the group, the monument required just a short walk through a subway that crosses beneath the busy roundabout above. The sound of sombre classical music - which unfortunately this uncultured ear couldn't identify - fills the broken ring representing the blockades one hope for supply and evacuation during the 900 days of the siege, 'The Road of Life'. Its worth reading the history of those events in advance as there is no English translation within the small exhibition hall that accompanies the site and we were reliant on our translater to understand the significance of the artifacts in front of us. (That said, a display case containing a number of small Soviet artifacts - where one party members richochet damaged medal and anothers identity book with added bullet hole - were pretty self explanatory in understanding the chances of survival were as much a question of luck)

There is also a short video presentation - without dialogue - that provides a glimpse of the horrors of the siege and numbing effect the daily sight of the dead and dying from the effects of hunger and constant bombardment had on the population. In all it was quite an effecting 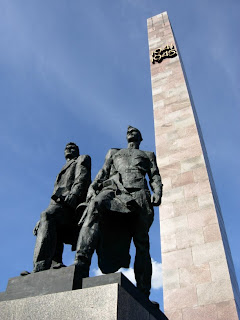 visit. I'm determined to see the museum of the blockade in the centre of the city to gain a more complete picture of events.

Finally, for someone obviously interested in learning the language one interesting point raised by Nastya was the significance of the language that adorned the walls of the monument. Full of 'Soviet speak' she explained how the significance of its content and the imagery it intended to convey was all but lost to those of her generation. It is only her parents and her grandparents generation that continue to interpret those words with meaning, whereas the children born after any real impression of the Soviet regime could be made on them see them just as empty words.

Posted by Malcolm Learns Russian at 09:24