It's been a couple of days now since my last post. I've spent that time away from the classroom and focused on filling in the blanks where my knowledge of the city is concerned. Geographically that has involved splitting the map into four and trying to focus on navigating my way 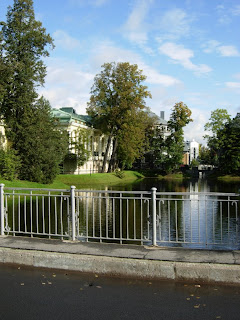 round each quarter. So far I've explored the northern half, yesterday to the East as far as Smolny - with its impressive cathedral complex and revolutionary centre thats isolated enough from the metro system to feel it in my legs afterwards - and today through the trio of islands to the West that include the real greenery of the city and the summer dachas of the richer sort.

I've had a thoroughly enjoyable day in fact. Covering a fair distance and a lot of bridges, I travelled by the metro to the northern most point (Chyornaya Rechka) of my journey and then worked my way down. Crossing first to Kamenny Island, I followed this round to the sight of Yelagin to the east - opting not to cross over what looked like a tolled bridge - and then south to the largest of the three, Kretovsky. I cut short my exploration there however, there was a lot of development work going on after the end of the summer season and my sights were set back towards the centre and a visit to the 'Kirov Museum'.

This really was a wonderful place to spend a few hours. The museum itself is a little difficult to find, there's a clear enough sign in English on the outside of the building but you then n 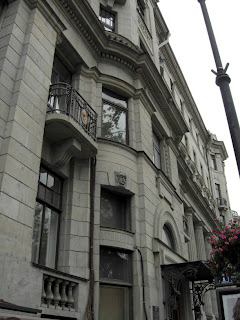 eed to climb to the fifth floor for the ticket office before returning to the fourth for the first exhibition space. A lovely restored view of this key figure in the Stalinist regime - both in life and then in death as a saintly hero of the revolution - and his apartment awaits. The curators, a collection of kindly old ladies, were wonderful, welcoming me through to their domain, complimenting my Russian and generally fussing to make sure all the lights were on and I was able to navigate my way through each room in the correct order. Although the translated notes that accompanied each room in the apartment were faultless and reminiscent of the material to be found in the Museum of Political History, when it came to the individual examples of his writing, photo descriptions and other artifacts further on, my Russian is still whoefully inadequate.

Returning to the fifth floor there is also an additional exhibition currently showing artifacts and images from children during the Soviet period. Its themed around school and rationing and proved equally fascinating. As I signed the guest book one of the curators asked if I could offer assistance in deciphering the correct pronounciation of 'vehicle' in Englis 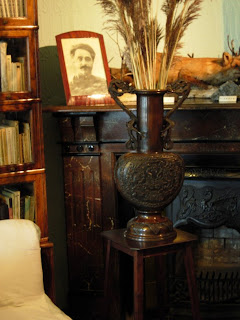 h. (Giving a good indication of why the translated notes had proved so good) Happy to oblige I was also pleased to be able to support the museum by buying a program in both Russian and English for a few roubles to see about improving my own language skills in retun.

My last little excursion involved crossing back to Nevsky Prospect and - after re-fueling with a little coffee and cake from my favourite store with the blue sign - calling into an antique store I'd been introduced to by Nastya on one of our practice lessons. There I'd come across an old Soviet childrens book from the 1950's. In wonderful condition it was full of little colour pictures, stories and handwriting practice. Unfortunately at 3000 roubles its a little out of my price range but I thought I should put my language skills to the test and use it as an exercise in speaking. Though I came away without the book, my interest was rewarded with by the opportunity to view a selection of other similar books, not in quite the same condition but which might prove a suitable alternative. I'm not sure. I left with the hope I might return tomorrow.