I did not come to Russia expecting to work on my tan. Someone important must have realised I was owed my fair share of summer after another year in Oxford and decided to gift St Petersburg with some sunshine along the way. 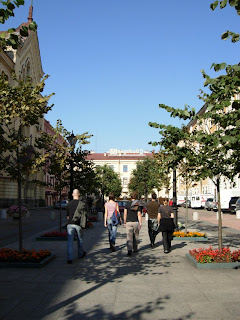 We've had cloudless skies today, and not in the wintry, see your own breath and frost covered lawns way, but the "I should really only be wearing a t-shirt" and "If I don't move soon I swear I'm going to burn" variety. Just look at the photos...

I'd make some half-arsed comment about global warming if I weren't so glad not to see rain for a change!

Anyway, all this was a backdrop to another excursion into the city with Nastya and the group. Not particularly far afield this time round, we explored the multitude of churches (both in number and denomination) that cover Nevsky Prospect within about a ten minute walk from the metro station.

While the churches themselves were originally established under the open door policy of Peter the Great, the decisive period in recent history for them was of course the anti-religious attitude of the Soviet Union. It is amazing to 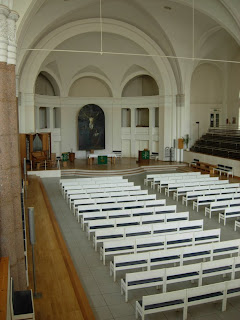 see how with this shift in attitude suddenly these religious centres were turned into everything from swimming pools, to concert halls, to warehouses. Granted some of this was out of necessesity during the 'Siege of Leningrad' (which for those of you interested the anniversary of its start was yesterday) while the rest fitted with the socialist agenda of the regime.

Unlike the fading presence of the Communist Party in the city - I did happen to notice a veteren selling copies of the party newspaper outside the metro station today - religion is again a visible force in St Peterburg. However the restoration work of its earthly temples is clearly incomplete. Its worth taking a visit to the Lutheran cathedral to see the photos from its time as a local swimming pool. When you walk inside you can still almost smell the chlorine at the sight of the public benches, white walls and levelled floor that still hint at its recent watery past. You'd think they could enjoy a roaring trade in mass baptisms if they just set the tap running again...

The Roman Catholic church - damaged by fire after its conversion to an orchestra hall in the 1980's - has embraced its troubled past with the salvaged remains of its east and west alters alongside the freshly painted walls and polished stonework. In much of these churc 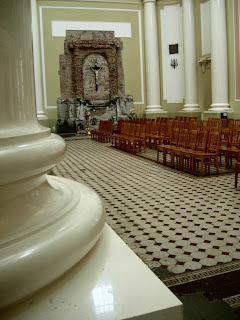 hes the reliance is on copies of pre-existing iconography and artworks after their destruction by revolution or war. However, one of the most striking aspects of this church is an original alter cross lovingly salvaged and stored by one of the faithful through the duration of the Soviet regime. The dangers related to such an undertaking were significant, though it should stand as indication of the failure to wipe out religion and faith during this period in the country's history.

All in all another successful introduction to the history and culture of this fascinating city. I'm looking forward to continuing in this vain with a first trip to 'The Russian Museum' during my private lesson tomorrow.
Posted by Malcolm Learns Russian at 08:19