From Oxford to St Petersburg (via Frankfurt)... 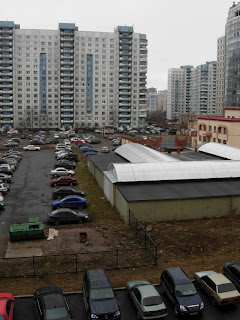 A very early start in the morning took me from Oxford to St Petersburg - via Frankfurt - with amazingly not a single delay, cancellation, missed connection, lost passport, or full body cavity search.

I'd like to put it down to German efficiency - flying with Lufthansa airlines saved me a lot of money in comparison to British Airways, as well as restoring my faith in the standard of service possible with air travel after a few years sticking to budget airlines - though I'm sure I just got lucky.

My first of no doubt many plugs - given willingly! - for the school has to be their offer of airport transfers to the apartment within the cost of the course. Granted I don't know if this is standard within the industry, but it ensured the journey was a relaxed one from start to finish.

What the driver lacked in English he made up for with enthusiatic pointing out of some of the major sights of the city as we drove along. As first impressions go no city is likely to look its best on a cold, grey afternoon at the tail end of winter. Passing through industrial areas from the airport, some of the city's architectural charm became more visible approaching the centre. This is again left behind on the final approach to the apartment / school where the Soviet tower blocks appear somewhat overbearing and built before the prevalance of cars - or need for widespread residential parking - was realised. Its grey and grimy, but what did you expect?

Anyway, if ever there was a case for not judging a book by it's cover its now. The interior of the apartment and attached classrooms where I will be taught - it being April and out of peak season - are clean, modern and inviting. The photos will give you something of the contrast.
4th April 2009
Posted by Malcolm Learns Russian at 00:23