Marching to a different beat... 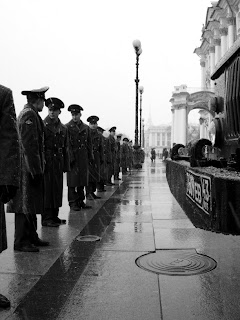 tch the surface of St Petersburg, I still want to emphasis its ability to throw up a number of unique and memorable experiences along the way.

For my Danish companion and I, our unexpected discovery of Russian opera within the confines of a museum of political history was in many ways matched by what we witnessed on our final afternoon dodging the weather in the grounds and galleries of the Hermitage. Knowing even a couple of hours in its labyrinth of exhibitions, before we intended to eat in the city, would cost us nothing with our student status we felt it worth the detour in light of a return to cold winds and wintry showers.

What we didn't expect to find was a full military parade in the midst of dress rehearsal, performing in the square to the amazement of a dwindling number tourists in the midst of a brief but bitter blizzard of snow. I did my best to capture some of the scene on my camera, both in still and video shots. Again though, its one of those moments that is better internalised than observed through a lens. 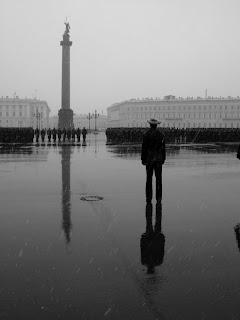 chance to witness such a unique display all the more attractive. This was a glimpse of Russia, a proud and stubborn display of military discipline and native grit. A throwback to a Soviet past, the sound of the old Red Army anthem at one point rang clear across the square from the regimental band.

Life marches along to a different rhythm here and a foreign tourist can easily find themselves falling out of step and daunted by the lack of a helping hand one takes for granted in most Western European cities. However I have been rewarded for my willingness to persevere and in return the city has provided opportunities for discovery that likewise, one may not expect to find in a more Western friendly centre.
Posted by Malcolm Learns Russian at 14:03