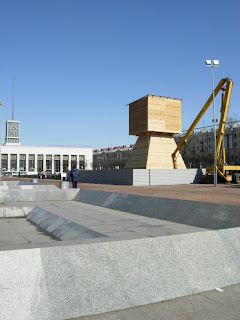 I've put some real mileage in today after this morning's class. The sun continues to shine and in the city centre that keeps things pleasantly warm. Travelling solo - giving me freedom to explore and avoid dragging my colleagues through places I might be alone in appreciating - I headed out to the infamous Finland Station where Lenin returned to the city in the midst of revolutionary upheaval.

His statue - the first of its kind to appear following his death - usually sits in the square directly in front of the station. However, for reasons that still remain unclear an explosive device, blowing a rather embarrasingly hole his backside, has resulted in the statue being covered from public view. Gone but not forgotten, his supporters have laid red carnations by the site. Interestingly I saw no sign of police or heightened security in the area after what I'm sure would be interpreted in any other western country as a legitimate terrrorist threat.

From here I made a quick detour to pass the imposing Kresty Prison before doubling back along the river towards Aptekarskiy Island. Crossing the river I drew up alongside the Cruiser Aurora, the second of my revolutionary themed sights. Surprised to find the ship open to tourists without charge I wandered across the deck and into its interior where an eclectic display of ship's artifacts can be found displayed with details of its role in Russian and Soviet history. Unfortunately the attraction as a whole is by no means pandering to foreign tourists with Russian text almost exclusively found within the exhibition space. 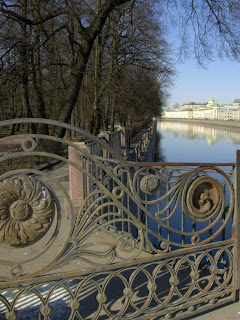 I carried on east along the river before turning north towards 'The Museum of Russian Political History'. A rather more democratic spin on what was orginally a musuem established to commemorate the October Revolution following the buildings occupation by Lenin on his return to the city in April 1917. I plan to return later in the week to explore its interior, along with the 'Kirov Museum' and 'Lenfilm' site further north along Kamennoostrovskiy Prospekt.

Feeling a storming of the Winter Palace was probably a little premature I opted instead to return to Nevsky Prospekt via the Summer Garden after crossing the river at Troitsky Most. (Trinity Bridge) The garden lived up to its name, looking decidedly bare before the advent of spring blossoms, however I was pleased to find the streets beginning to reveal a certain architectural charm by the banks of the canal. Here then one could see glimpses of the city as a 'Venice of the North', however for me the noise and distraction provided by its bustling roads makes it much harder to appreciate the city on the same level. This is above all a loud, busy and industrious city where the tourist - particularly a foreign one - has little influence on the pace and pattern of life here.
Posted by Malcolm Learns Russian at 07:41