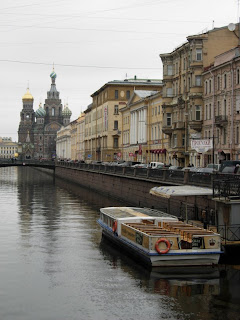 The fact that I'm catching up on my first weekends worth of posts on Monday night should give you some idea of how busy I've been. Either that or reveal my technical ineptitude when it comes to setting up something like this.

Anyway, it seems a good excuse to keep things short and sweet. I assume these posts are supposed to be a soundboard for ideas as they emerge, not mulled over, edited and rehashed a few days later.

My Fellow Students: Mostly Dutch, plus a Belgian and Dane. Nice people, unfortunately as I should have expected they all speak perfect English thereby negating my effort to isolate myself from my first language to concentrate on Russian.

The Local Supermarket: Basic, but well stocked and reasonably priced. (For most things) Plus an ATM so I won't go without money having brought my bank card and no cash short of a few emergency US Dollars. In case you the reader weren't aware, you can't buy Roubles outside of Russia. For me, since the British Pound has collapsed against the Euro, US currency was the better option.

The Metro: Our chosen mode of transport travelling as a group on the Sunday into the centre. Its deep, its cheap and its built for distance rather than convenience. (i.e. the stops are well spread but we're only two away from the city centre) At this stage in the course - never mind what advice the guide books give for interpretting the noise - I do not expect to end my two weeks able to understand the station announcements garbled by the carriage's loudspeaker.

The City (mostly Nevskiy Prospekt): The main street is wide and long. (especially if you come out without a map, don't plan ahead and wander off in the wrong direction...) Should have brought walking boots, I expect to be doing a lot of it.

Posted by Malcolm Learns Russian at 00:32