It's not the destination, it's the journey...

What an adventure! Fifteen hours of travel, seeing the inside of four separate airport terminals, frantic messages across a continent and a battle against time to avoid a night stranded the wrong side of the Neva...

Still, I'm here. Back in St. Petersburg after three years away from the Motherland, spending the interim buckling down with my studies and hoping, above all, that my language skills hadn't dwindled away to nothing.

I left Oxford in the early hours of yesterday morning. The bus trip to Heathrow followed without a hitch. The problems started when I discovered the air traffic control network in the UK had completely shut-down. Lesson learned, do not try and book connecting flights with Lufthansa with a window of half an hour. 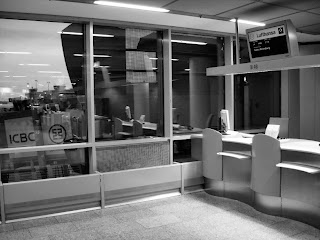 To be fair I've never been stung before and this was to be my first real 'airport adventure'. It felt a little like some bad Christmas movie; desperately trying to get home to see the kids and willing to pursue every possible mode of transport, change of route and means of communication to secure that aim.

I arrived in Munich an hour after my connection had already left. At that point I faced a wait of seven hours and a flight that would get me to Petersburg at 1am, or a further transfer to Frankfurt and then on to my final destination, aiming to arrive for 11pm. To be fair to Lufthansa, their personnel (both in the air and on the ground) were incredibly helpful throughout the whole process. The option to connect to Frankfurt seemed, at least initially, a step too far until I made contact with Bart (the language co-ordinator here in Petersburg) and realised a 1am arrival would leave me stranded at the airport with the metro closed and bridges opened to allow water traffic along the Neva...блин! 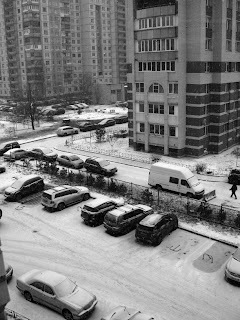 So it was off to Frankfurt, another wait, more clock watching and a much needed meal voucher to refuel and prepare for the final leg of my journey. Having by now long missed my pre-booked airport transfer from Pulkova airport to the apartment in Petersburg, I was going to have to go this one alone via taxi.

And so things got to end on a high note of sorts. Bart was the other key piece in this organisational nightmare, providing invaluable support as I navigated the various options at the airport and helping to ensure I arrived at the apartment in one piece and not too out of pocket. Thanks to him I had an idea of what I would expect to pay for a taxi (1500 roubles) and the confidence I'd be able to find my way to a warm bed at the end of it all.

The interaction with a taxi driver, in Russian, and even a passing joke about the weather might seem like such a little thing, but at the end of the day that's why I'm here. My aim is to feel like this language, though an ongoing journey, is one even I can navigate, while the ultimate destination, however distant, is also one that I might eventually reach.
Posted by Malcolm Learns Russian at 00:45