A path to victory...

One of the things I have Russia to thank for is my return to playing competitive basketball at university. When last in Moscow three years ago, I was lucky enough to be gifted with unseasonably good weather through September and October. This allowed myself and a group of fellow foreign historians working in the archives (mostly from Canada and the US) to spend some of our free time playing basketball on an outdoor basket just down the road from one of the archives (GARF). 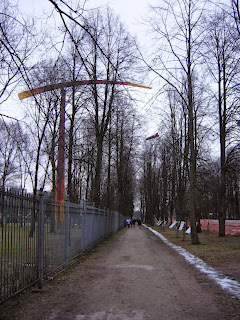 We also managed to find the opportunity to watch a couple of live games played at CSKA's home court. It was a return to the sport after an absence of quite a few years and if there's one thing I'm missing while in Petersburg, its being able to practice on any court - indoor or out!

Having a free day from lessons on Sunday I decided to track down a game for local team Spartak. I found their game schedule online through the official website - helpfully translated into English - though stopped short of buying a ticket at this point. From my experience of Moscow I assumed I could manage to pick-up tickets on the door fairly easily, though did check the price and seating plan on the website.

It meant a trip on the metro up to Krestovskiy Ostrov on the purple line (M5). I can't actually remember the last time I travelled on this section of the metro and its bit of a pain connecting from the green line (M3) that runs from Primorskaya. I left plenty of time though and it seemed pretty clear where I was going from Google maps once I got there. 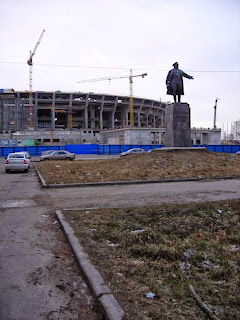 Rather than a road from the metro to the arena - or 'basketball complex' and its designated on the maps - it's a long pedestrianised avenue through 'Maritime Victory Park' (checking with a local taxi driver, the directions of "go straight, straight, and straight" were simple enough even for me to decipher!). The whole length of it seems to be under construction of some sort. I also discovered a pretty substantial looking theme park, evidently closed for the season, as I began the trek to the game.

The theme of 'closed for repairs' seemed to continue when I got to the end of the path. Fronted by a statue of our old friend Kirov, was the huge stadium sharing his name, surrounded by cranes and building works. However, just to the left was a pretty new and swish looking 'Cyber Arena', the home of Spartak basketball.

The facilities inside were similarly impressive and the game offered a great show. A shaky start from the home team before a tightening of the defense and improved ball movement saw them open a ten point lead in the second half. This wavered a little as the game reached its closing stages, but was eventually tied up after a well timed three pointer from one of their American squad members who was clearly confident shooting from the NBA regulation distance. 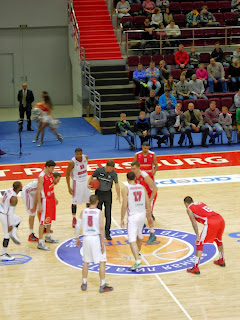 It wasn't exactly a packed out arena - in fact I was tempted to think it a good idea I'd bought a 400 rather than 200 rouble ticket as the outer seats looked pretty empty - but the atmosphere was good,  the chants lively and the cheerleaders easy on the eye. Paying 100 roubles for a bar of chocolate (a Twix!) at half time was a bit of a shock to the system, but it was generally value for money (I would actually consider buying the cheaper ticket next time as people seemed pretty flexible with moving to seats closer to the action once the game began).
Posted by Malcolm Learns Russian at 07:13