I took a trip to one of the old districts steeped in revolutionary history today. A statue of Comrade Kirov dominates the central square, giving his name to much of the surroun 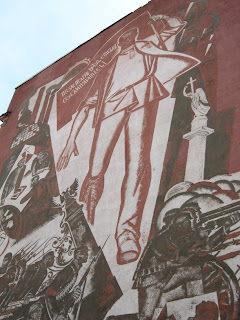 ding area, including the Kirov Factory, metro station and shopping centre. He's a figure surrounded by 'what-if's?' and 'who-dunnits?' in the history of early Stalinist Russia. Go see the Kirov Museum dedicated to his memory if you get the chance and don't assume the conspiracy theorists have it right when they argue Stalin played a direct role in his death. As ever, the jury is still out on that one...

However even before his name christened the post-revolutionary redevelopment of the region the streets had seen their share of working class unrest. Both the 1905 and February 1917 revolutions were precipitated by unrest at the nearby industrial complex. An impressive, constructivist inspired mural covers one of the buildings in memory of those proletarian heroes.

Perhaps its my working class roots but something about early Soviet design still resonates with me. Never mind the hammer and sickle being one of the most striking political and cultural symbols of recent years, its whole design ethos with clean lines and angular geometry seems powerful and timeless. They could design a good monument too, just cons 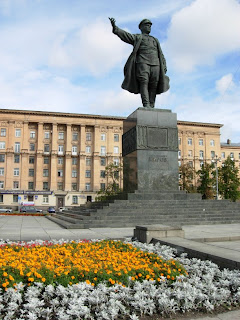 ider the one that sits at the entrance to the city commemorating the Leningrad Blockade.

Just around the corner I took a stroll through Ekaterinahof Park. A grassy little 'oasis' full of shady trees and delapidated fairground rides that still manages to lay claim to housing possibly the only remaining profile of Stalin in the city's vast collection of statues and memorials. Not that you'd know unless you were looking hard enough. Sculpted into the banner of a piece commemorating the Komsomol youth, his face is just visible alongside Lenin's. You'd be hard pressed to see it in a photo. Not that I have one. Damn camera ran out of battery!
Posted by Malcolm Learns Russian at 10:56