Sending in the big guns... 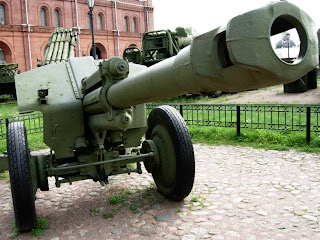 Unfortunately this write up is coming about three months after the event - filling gaps from my absence in Moscow - but I thought there were a few worthwhile words / photos to include still.

Despite the absence of any T-34 tanks, I'd recommend losing a few hours in the vaulted 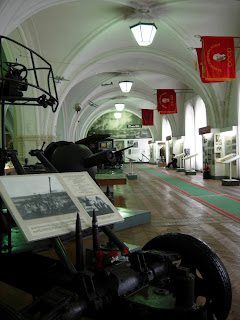 corridors of the artillery museum. Its a pretty comprehensive history, everything from the early days of cannons - including some pretty impressive contraptions that never quite took off in the same way...discus firing gun anyone? - through to the nuclear age and rockets that look like they should never have fitted in through the front door.
For my own research interests it was nice to finally find a token reference to the Winter War in one of the last rooms dedicated to the engineers corps. The exhibitions seems to have survived intact from the Soviet period, praising the exploits of its heroes and giving great attention to the successful undermining of White Finnish defences and the notorious 'Mannerheim Line'. 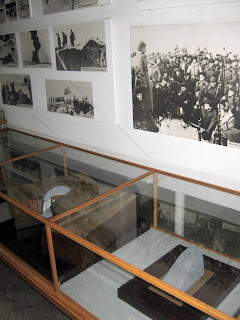 Enjoy the photos. For you animal lovers out there you might want to avoid the cabinets housing stuffed dogs strapped to explosives. They were trained to run under German tanks. I'm assuming those on display died a less dramatic death, otherwise it must have been a hell of job piecing them together again.
P.S - I almost forgot. For those of you want to experience a throwback to the Soviet days of the 'Stoloviaya' kitchen canteen you'll find one in the museum. Its menu is a little better than we get among the Moscow archives but you mind find a taste for them.
Posted by Malcolm Learns Russian at 12:36